I have always wanted to have a 80’s themed party. I love to dress up so I will find any excuse to. I usually travel for my birthday, but since this year I was going to be around I figured I would throw a party. I haven’t had a birthday party since I was a child! So, I scoured pinterest for ideas. I figured I would write a blog and share what I did for anyone out there wanting to throw a 80’s theme party! It was really fun! Everyone participated and dressed up which made it great!

1. 80’s Themed Cake: I figure if i’m going to have a party ..the cake has to be amazing..Cake is very important. I worked with Riviera Bakehouse in Ardsley. Cake was delicious buttercream and decorations were chocolate pieces. I’m not a big fan of fondant since it is very expensive and it does not taste very good! It had all the key things I wanted on it such as a MTV symbol, rollerskate,  rubik’s cube, and a boombox. The buttercream was neon green with black leopard stripes. I loved it and it tasted delicious too! 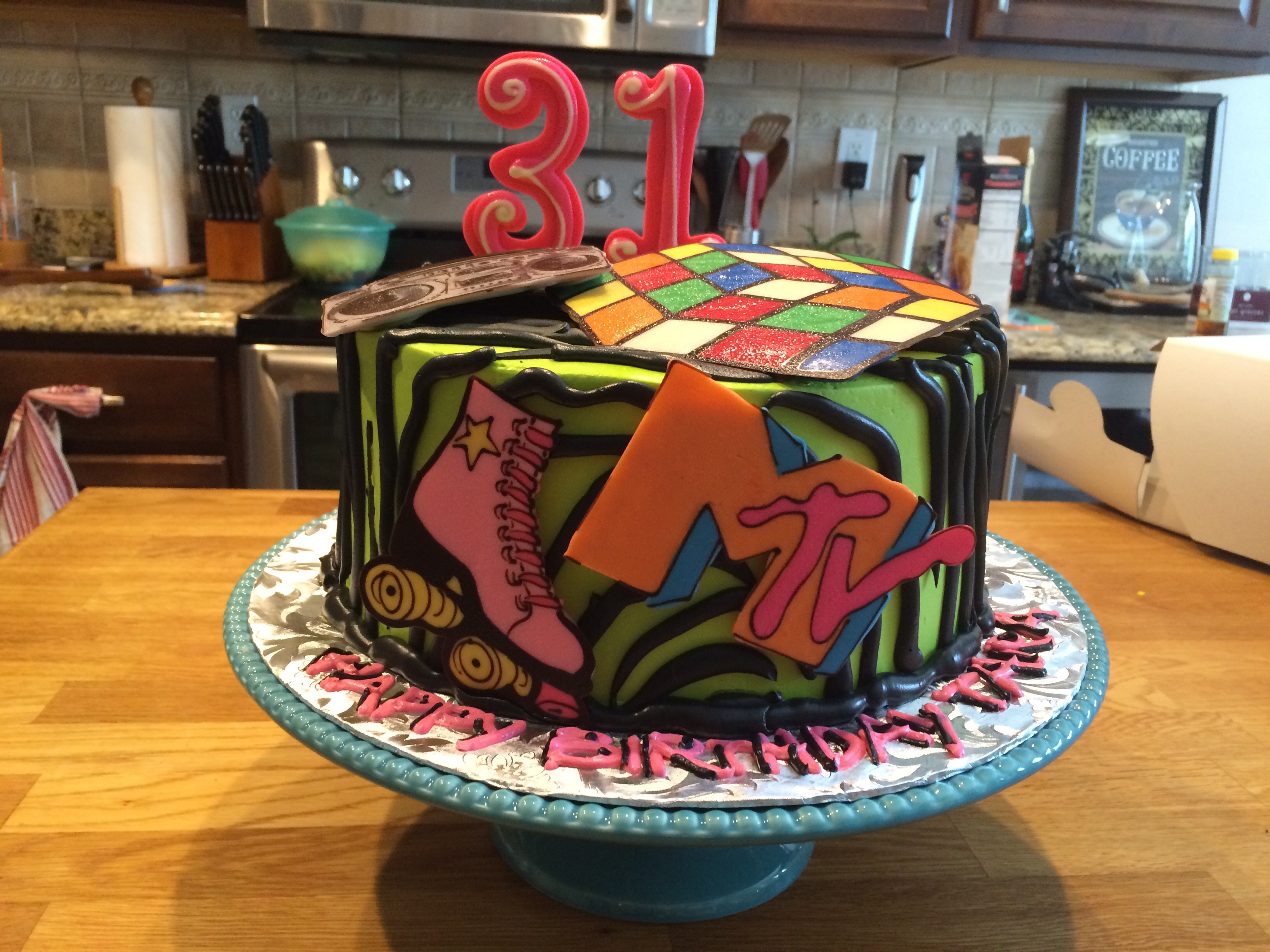 2. Decorations: My hubby put together a giant rubik’s cube using a cardboard box. He taped black copy paper to it. Then added the multicolor copying paper to recreate the rubik’s cube. He’s very particular so it was lined up exactly how the original one was. Also I bought decorations from oriental trading. An inflatable boom box, neon disposable cutlery and cups that read I Love 80’s along with miniature Rubik’s cubes. Also, glow sticks were used.. I even found glow stick glasses and earrings! We also put cutouts on the wall that I purchased from Party City and we printed some out ourselves along with Pac Man cutouts we made. I thought the PacMan cutouts were the cutest (my daughter’s idea) and they were displayed around the house and up our stairway! (dots, pacman, and ghosts) 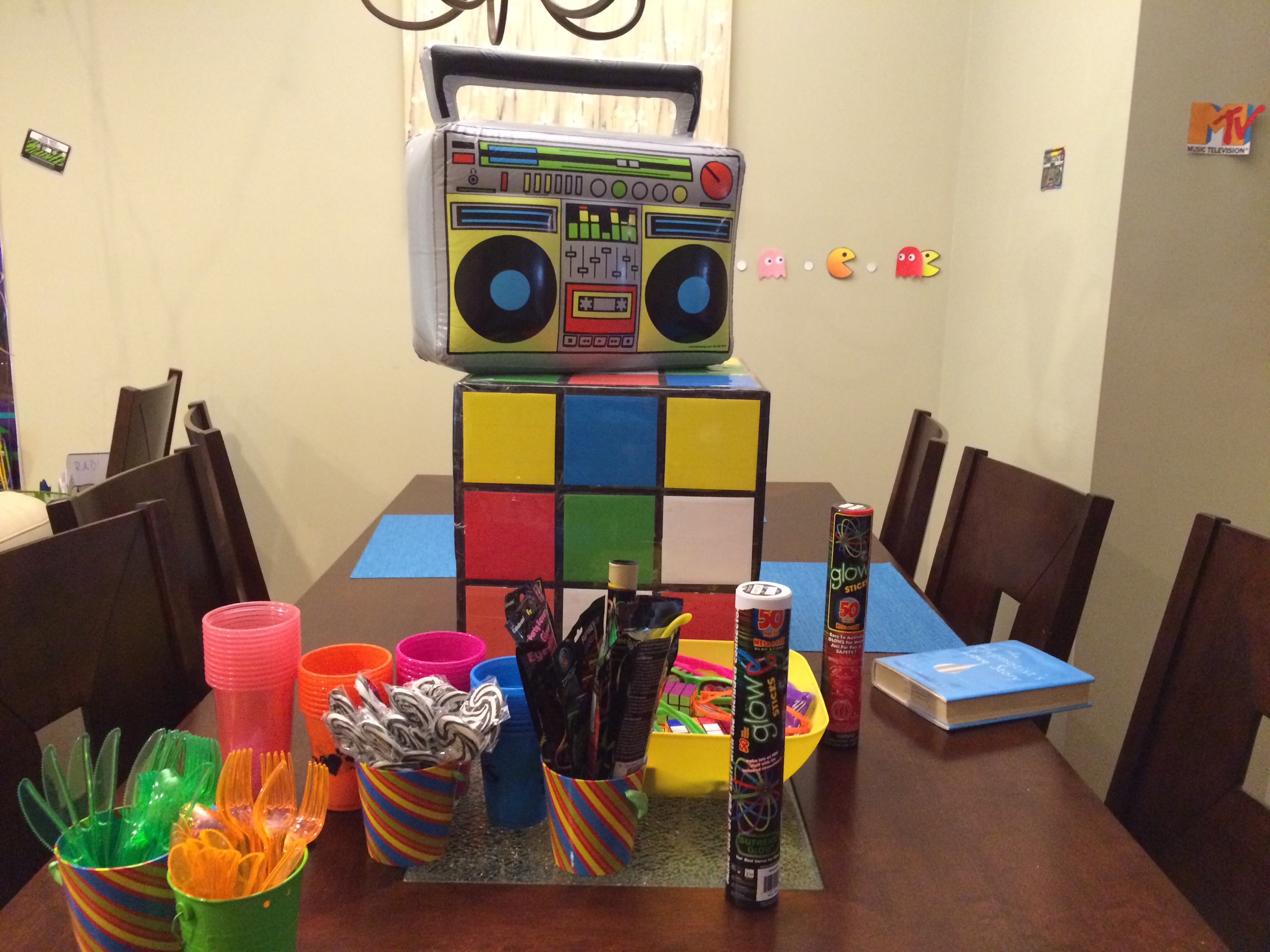 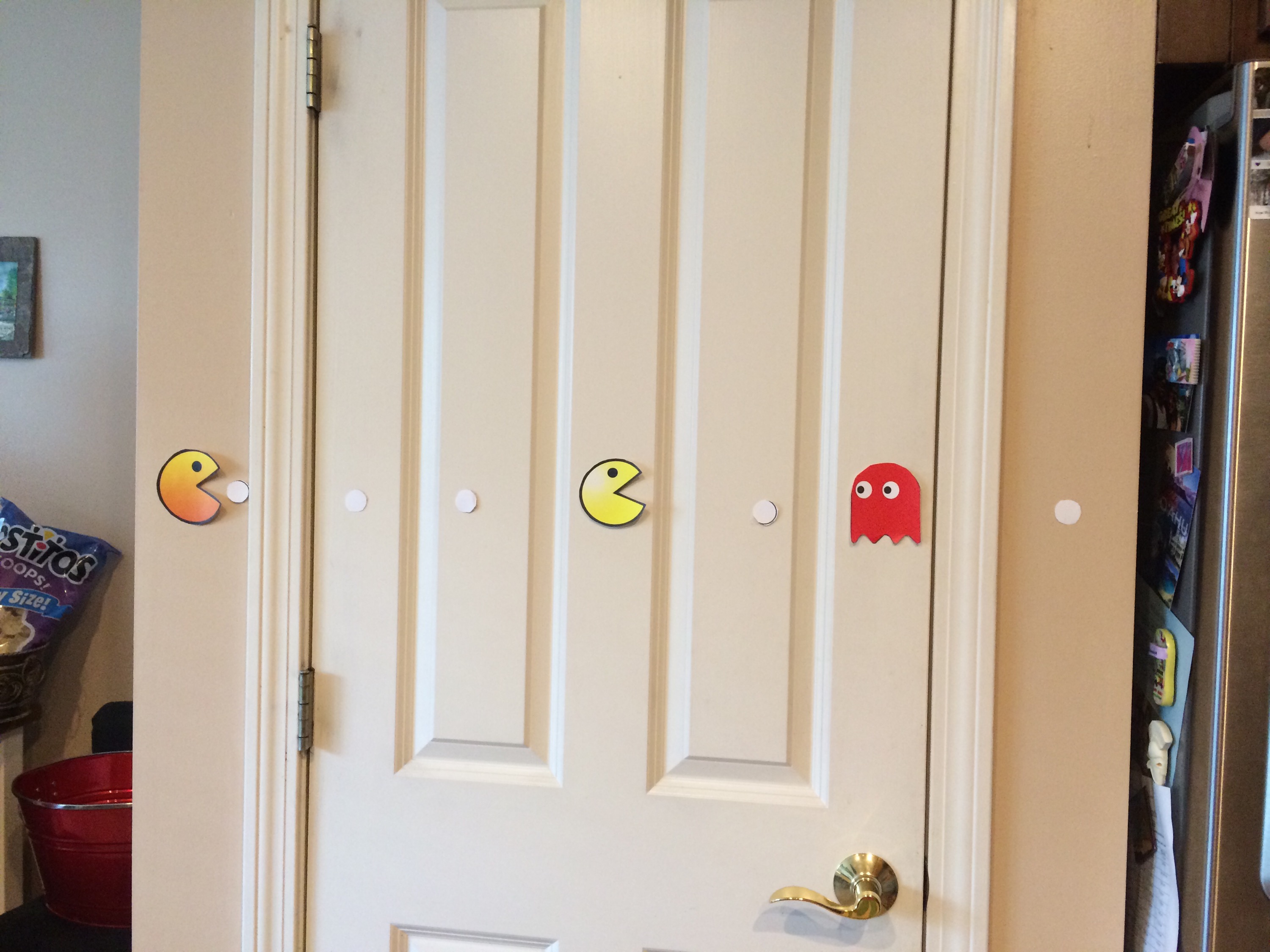 3. Photo Booth: I love taking pictures and photo booths are a fun way to get everyone involved! I Purchased a cheap background from Walmart and some props. Voila! 80’s themed photo booth! 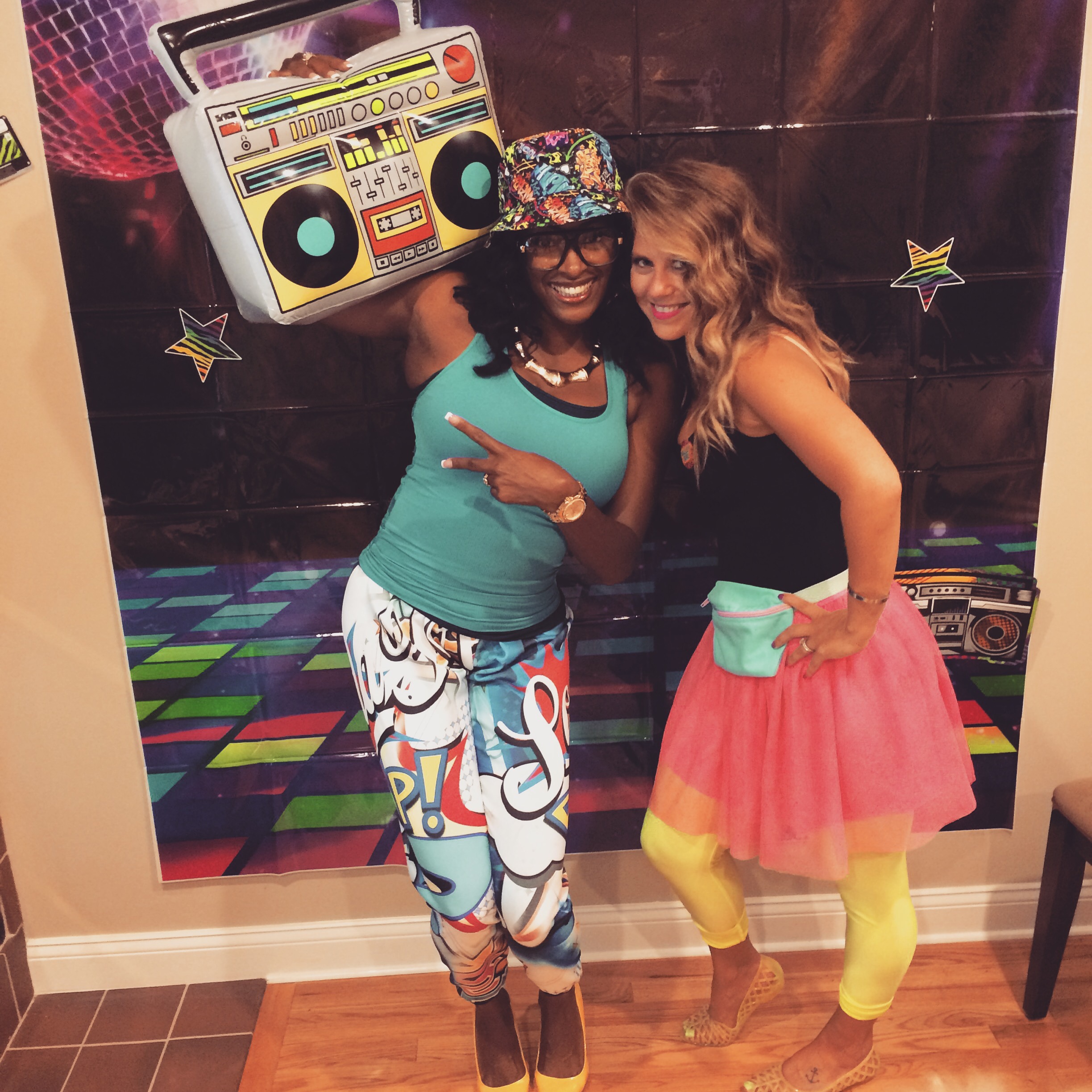 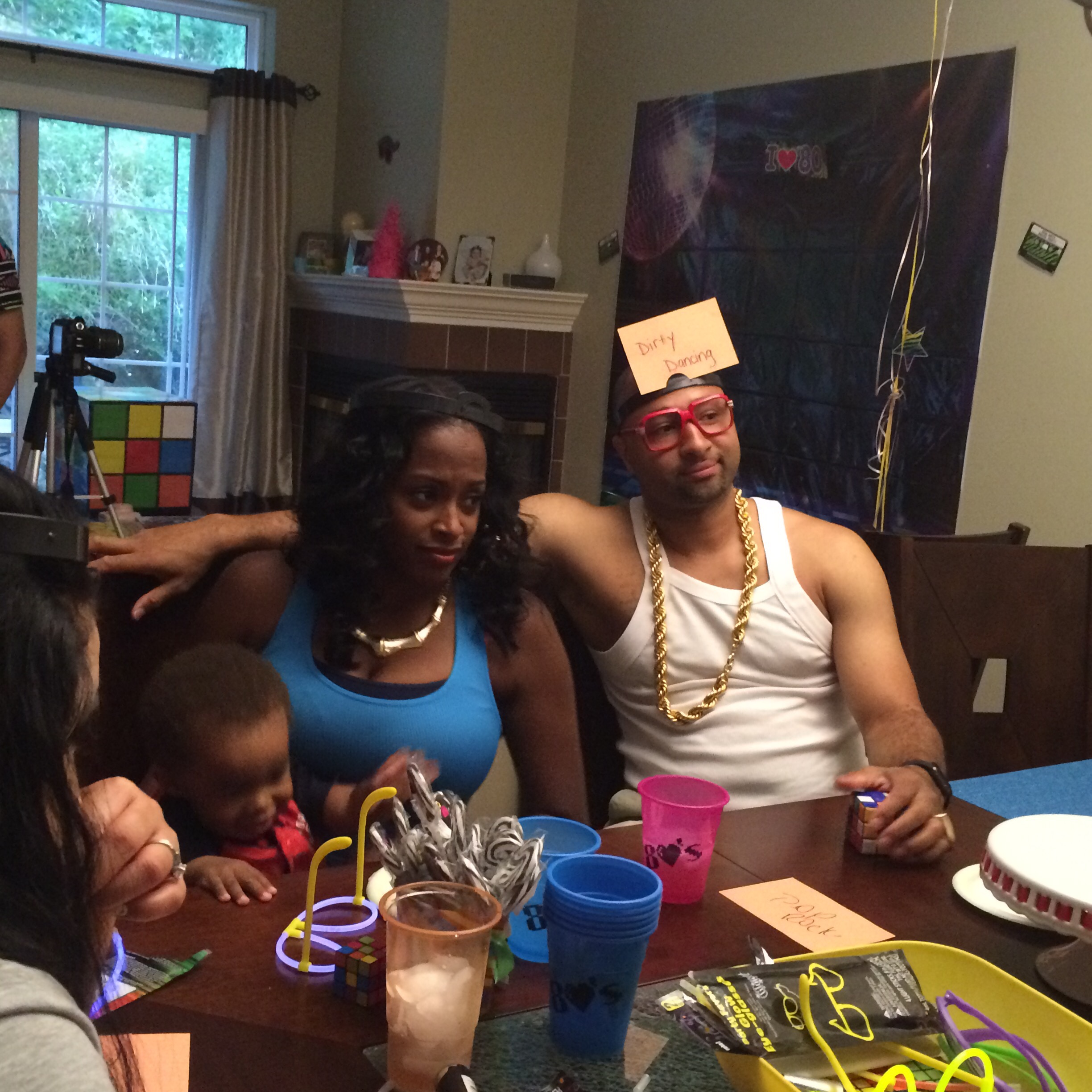 5. Candy: I ordered Personalized lollipops that were supposed to read Tara’s Totally Bitchin 80’s party but was later changed to Tara’s Totally Radical 80’s party due to the profanity (Gasp). Yes I have a potty mouth! Fun Dip, Candy Dots, Nerds, Push pops, and pop rocks were all put in a basket. Also, I threw in the candy cigarettes I felt kind of guilty but they were a big hit! I was a big fan of them when I was little so I had to get them. These were purchased at Five Below.. love that store!

6.Cupcakes: I love baking however it was hot and I didn’t want to be stuck baking on my birthday weekend. So I bought cupcakes from the supermarket with Princess Peach rings on them (I figured Mario Bros. were also 80’s). Then we printed tiny printouts of cassette tapes, Ghostbusters, I love 80’s, and rainbow bright. You can just tape or glue them onto toothpicks.

7. Music: Of course you have to have 80’s music! We made our own playlist with my fav 80’s songs from artists like New Kids on The Block, Paula Abdul, Cyndi Lauper, New Edition, and Madonna.